A Site For New Discoveries

As life sciences and engineering increasingly intersect, new facilities are needed to facilitate that interaction. UC Santa Barbara has recognized that growing overlap and placed bioengineering at the heart of its campus. Envisioned as a new hub for the UCSB science community, the Center for BioEngineering, designed by Moore Ruble Yudell, opened last October, welcoming 14 faculty, 78 graduate students and 28 postdoctoral fellows working at the interface of biology and engineering.

The new building, which houses the Center for BioEngineering and the Institute for Collaborative Biotechnologies, comes as new bioengineering research is upending everything from disease detection and diagnosis to how drugs are delivered to specific sites within the body. UCSB has been the driver of much of this research, ranked in the top 20 in the country for its bioengineering program by the UC News & World Report in 2018. But the new building is allowing the university to further expand its work in this growing field, as it expects to soon offer a graduate emphasis in bioengineering for PhD students and a bioengineering bachelors degree program.

The Center for BioEngineering is expected to be the site of ground-breaking discoveries that will help transform the fields of medicine and biotechnology. But the building itself is cutting edge, too. Working at the center of a busy campus, Rudolph and Sletten was able to create a 48,000sf, four-story building—including basement, three-story-tall atrium and 100-seat lecture hall—that is uniquely open, durable and energy efficient for a facility housing state-of-the-art laboratories and mechanical systems.

The building’s location in the center of campus, at the intersection of two of the university’s busiest walkways, demonstrates the high priority UCSB places on the building and on its bioengineering research. But it also represented challenges for the project team. 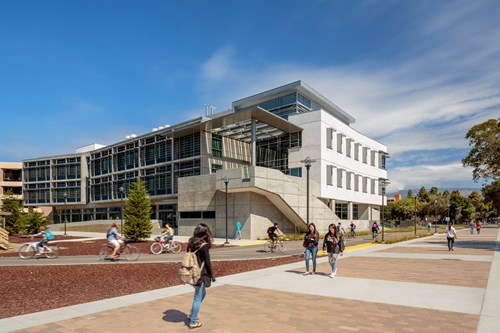 A number of utility lines serving the nearby Davidson Library ran through the site of the new building. The fact that the library stays open to students 24 hours a day, seven days a week further complicated things—as did the many utility needs of the labs: compressed air, vacuum systems, oxygen, natural gas, water and fume hoods with exhaust fans. Working within specified, very short time frames, Rudolph and Sletten teams did utility shutdowns without disrupting students or the bustling campus, ultimately installing utility lines within a tight corridor.

Throughout the construction, an especially high number of inspections were carried out to accommodate the additional requirements that come with state funding for a public university project.

“It’s very challenging on a lab project to make it energy efficient,” says R&S project manager Kevin Moore. “Fortunately, we were able to take advantage of being in Santa Barbara.”

UCSB’s coastal location and generally mild climate allowed the team to rely on lots of natural lighting and natural ventilation, augmented by ceiling fans. That limited the need for air conditioning and heating, typically the biggest energy users. “It seems basic, but there’s lots of energy savings there,” says Moore. Chilled beams and radiant flooring in the atrium— as well as some traditional radiators —round out the building’s energy efficiency strategy. 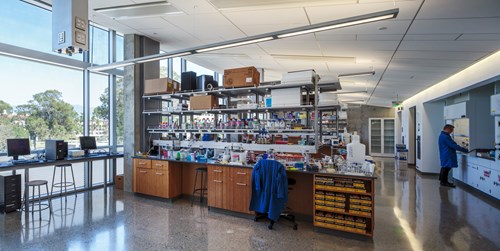 The design presented challenges as well. Heavy, daily foot traffic and all the angles and alcoves needed to accommodate a range of different facilities and offices required careful planning and innovative solutions.

“It’s not a box by any means,” says Moore. “There’s straight lines everywhere, but they’re turning every ten feet or so. It’s a rectangle, but it goes in and out.” That required additional time ensuring the dimensions were right with every turn and angle and change of direction —and change of material.

“Interaction rooms” on each floor encourage collaboration with colleagues and open up onto views of the campus and surrounding mountains. And the public center of the building is an airy atrium, open to three stories of administrator and faculty offices.

To accommodate the foot traffic and last for decades to come, the atrium was given exposed concrete floors, which will wear better than carpet or tile. But, to ensure the floors look as good as they wear, the team did a heavy grind on the concrete, taking about three-eighths of an inch off and exposing the aggregate, speckled and smoothed off. “It looks almost like terrazzo,” Moore says. “You get that wearability of concrete but will still look cool.” 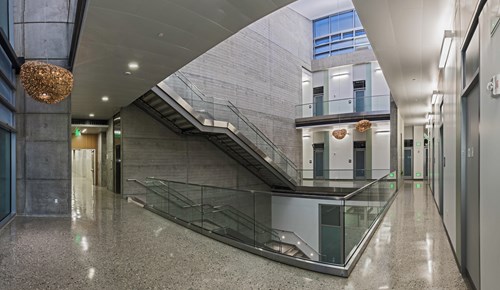 The culmination of a decade of planning, complex fundraising efforts and nearly two years of construction, this vital research center exemplifies the benefits of collaboration both in its creation and function. As Brad Chmelka, Co-Director of UCSB's Institute for Collaborative Biotechnologies so aptly said, “The future is brighter for a broad range of shared research because of this investment.” 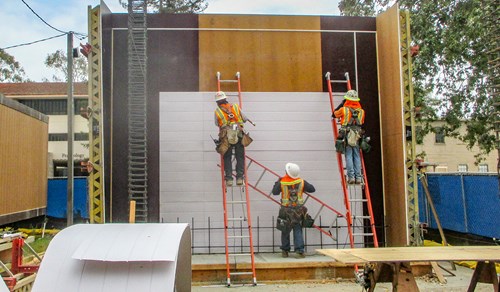 Further quality measures entailed construction of a two-story mock-up of several exterior building conditions.  All team members heavily scrutinized and carefully inspected the mock-up, learning and resolving many challenges before beginning work in the field. This massive preplanning effort significantly contributed to achieving a high degree of aesthetic and waterproofing quality for the exterior skin.